IDGM+ webinar: "How to make the international financing of SDGs adapted to new vulnerabilities?" The third and last session of the webinars of the Initiative for Development and Global Governance (Labex IDGM+): "Financing the 2030 Agenda in a vulnerable world" took place on 16 June 2020.

The topic of this session was the adaptation of the international financing of the Sustainable Development Goals (SDGs) to new vulnerabilities. There was an exchange and discussion of the points of view from different angles by 8 well-known actors in development financing. To date, more than 400 people have viewed it.

As a preamble, Patrick Guillaumont recalled that taking into account countries' vulnerability in the allocation of international development aid, a central theme of FERDI's work, is particularly necessary nowadays. The main vulnerability of African countries is not just the excess mortality associated with COVID-19 but the risk of excess mortality due to the recession transmitted by the countries of the North. North countries, therefore, have a responsibility to help African countries to get back on the growth path.

Masood Ahmed reminded the webinar participants that even before the COVID-19 pandemic, the trajectory of development finance, particularly for low-income countries, was falling well short of the 2015 expectations. This call for the strengthening of the action of development finance institutions, both multilateral and regional, to address the crisis triggered by the pandemic. Given the scale of the crisis, as it is likely to affect developing countries, international institutions' support is too timid. The bold proposals put forward have not yet been implemented. However, because of the growing difficulty in mobilizing private funds, public financing for development, of which the financing institutions were the pillars, would continue to play a central role in supporting the continued progress of these countries. Therefore, these institutions must be supported in their action and work in a coordinated manner free from rivalries between major powers. In this respect, Europe has a role to play as the leading provider of development aid and a powerful player in international negotiations - provided that disagreements within Europe do not undermine this possibility.

Jean-Michel Severino made a strong plea for international public actors to pay attention to African SMEs. With the COVID crisis, Africa's fragile and emergent productive sector, represented by informal enterprises and more formal SMEs, is in great difficulty. However, these SMEs are fundamental to achieving the SDGs. Thanks to the employment they provide they permit a structuring of society, access to basic needs, and growth. International private financing will not be of any help. Governments' measures, sometimes massive, to support their national productive sector, will remain insufficient. Developing countries are themselves under severe constraints in the financing of their budgets. This reinforces the role of official development assistance in support of developing countries' public policies. Jean-Michel Severino recommended that international support should focus on the private sector and that unconventional actions have to be undertaken. The aims are preventing the domestic private sector from becoming the financier of last resort for governments, supporting the banking and microfinance sectors, focusing on SMEs, and intervening directly in the private sector to strengthen formal enterprises' equity. Several instruments exist (sovereign wealth funds, private investment funds, associations, etc.), each country has its own instruments. While the international community has committed itself to respond to the health issue, it is more in the microeconomic field that actions are now needed.

Paul Collier stressed the essential role of local businesses for the growth of African countries, and the importance of developing and preserving them. Formal firms in Africa have suffered much greater external shocks than in Europe. Unlike in Europe, developing countries in Africa do not have a network of institutions, nor the possibility of borrowing at zero interest rates, nor internal mechanisms to provide relief to enterprises in need of financial assistance. Therefore, solutions must be sought to enable African countries to borrow. Fragile states in Africa will stay fragile unless their economies turn round – i.e. unless there are a lot more private sector jobs. However, pioneering companies face many barriers, including high risks, high uncertainties, and very high costs. Business associations are one of the solutions to reduce costs. Also, there are about 30 financial institutions worldwide which can help this sector, but there is no single form that can provide a complete response. We need to work towards this and propose proactive reforms in consultation with governments. As the entry costs for these solutions are high, the institutions have to bring in money.

Tidjane Thiam confirmed the unprecedented economic scale and immediate effect on Africa of the economic shock related to COVID 19, and prefaced his remarks with some key figures. All the countries of the world have taken extraordinary measures to support their economies and the measures taken by States have represented 0.8% of GDP while the measures taken by developed countries to support their economies have been of the order of 9% to 10%. Using this example, Tidjiane Thiam highlighted two important points: the debt issue and the resilience capacity of African countries. Resilience is a fundamental objective. A key element of resilience is the trade-off between the short term and the long term. This relates to social investments – such as education and health - which are investments with a long payback time that the private sector can provide at lower costs than Western systems in terms of GDP. Resilience also relates to solidarity and social ties, which are strong elements in Africa. But resilience also implies prudence in long-term decision-making, especially concerning debt. Unfortunately, some countries have resorted to debt on terms that are not acceptable and non-standard. Access to the capital market cannot be used as an indicator of economic performance. Another important development factor is that of entrepreneurship. The amount of wealth creation associated with successful entrepreneurs is systematically underestimated. We are therefore faced with two scenarios for the future. The first adverse scenario focuses only on the short term. The second more positive scenario leaves no one out, puts the private sector at its heart, addresses the role of debt, mobilizes additional SDRs, brings in resources, particularly from IDA, and involves private banks as well as China. This crisis should be an opportunity to move towards innovative actions and solutions.

Laureen Kouassi-Olsson, defended the role of a large investment fund for the most vulnerable countries. She noted that Africa is no longer as vulnerable as in the past. Today Africa has the strongest economic growth and a long history of disease management. Within the continent there are two types of countries. On one side, countries heavily dependent on raw materials such as Nigeria, have suffered much from the crisis. On the other side, more diversified economies, such as Côte d'Ivoire, have been able to adapt and reorganize their economies. Adaptation has involved accelerating digitization in the financial sector. It has involved the public sector's responsiveness to support the economy and the private sector with tax and banking arrangements. It also includes the reequipment of hospitals and the setting up of ad hoc infrastructures to cope with the pandemic. The continent is undergoing profound changes and an investment fund such as AMETHIS can play a role in this transformation by attracting funds from investors other than development financial institutions. AMETHIS, through its knowledge of the continent, identifies investment opportunities and shows that it is profitable to invest in Africa. It accompanies and supports local industries and national and regional champions that are strategic for the continent's development. Laureen Kouassi-Olsson believes that there should be more investment funds of this type and that the crisis should be an opportunity to reinvent the continent's economy and development.

Christophe Bories referred to the approaches and the long-term objectives of the French public sector in the face of the covid-19 crisis in Africa, he recalled that the French government did not wait for the crisis to have a differentiated approach to countries. The French government already has mechanisms  to choose the relevant interventions, themes and tools for countries. In fragile countries and LDCs, grants are favored, and for other countries loans are set up according to their capacity to take on debt. In the present crisis things have been somewhat different. There has been a trade-off between the short term and the long term. Typically, the French government's aid to the health sector in Africa was aimed not only at distributing medicines but also at maintaining the resilience of States and companies in the face of the crisis. Now, it is necessary to help States to continue to provide services despite the crisis with direct financing but also through debt. There has been an unprecedented mobilization of international creditors to suspend debt servicing, which has allowed States to respond to the crisis but also to allow time to analyze long-term financial needs and debt. International financial institutions must work together on individual needs before engaging in debt treatment. A new issue of special drawing rights could reduce the financing needs of developing countries, but the debate is still ongoing. On the debt relief initiative, progress is being made. 31 countries have applied for debt relief and 14 countries have completed the procedure. It has also been necessary to examine what could be done in collaboration with the private sector and the multilateral development banks. Lastly, the French State wishes to maintain support for the African SMEs and entrepreneurs who are a source of growth.

Lisa Chauvet identified 3 changes in the development economics research agenda as a result of the crisis. Traditionally research on financing development has focused on 2 main topics. The first topic is the volume of finance for SDGs, including the challenge of resource mobilization. The second topic is aid effectiveness. With the economic consequences of COVID-19, the timing of the research agenda has been affected. Although research traditionally takes place over a long period, research has had to react quickly to this unprecedented crisis and the lack of knowledge about it. The objectives now are, firstly, to determine the actors affected the resilience factors, and the actions to be taken. With the crisis old issues came back on the scene such issues as the role of debt and the needs of education and health. Lastly, the crisis has opened up new perspectives with opportunities to be seized to change the model and move towards a model more in line with SDGs, i.e. a greener, more inclusive, and more local model.

The final part of the webinar was devoted to questions from the audience. The discussion returned to the key role of agriculture in the small and medium enterprise sector, debt, and zero interest rate loans in Africa. 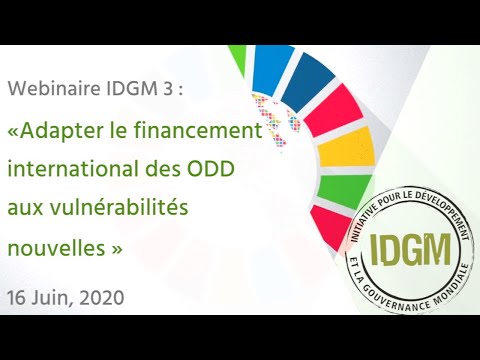