CGD-Ferdi Webinar: What to do with recycled Special Drawing Rights? Roundtable organized by the Center for Global Development (CGD) and the Foundation for studies and Research on International Development (Ferdi), on the allocation of recycled SDRs.

This roundtable focused on the allocation of recycled SDRs, in particular on the criteria that could be chosen to best take in account the vulnerability of countries and its multidimensional nature, and on the use of these SDRs by recipient governments.

The voluntary reallocation of a portion of SDRs from advanced countries to the vulnerable developing countries is one of the most important transformations of the international monetary system in recent years. Attention has so far been focused on the channels of this reallocation, because of the need to preserve the reserve asset nature of SDRs. It is equally important to discuss the geographical distribution and use of these SDRs. However, the choice of channels partly pre-empts this discussion. For example, the SDRs that will be lent to the PRGT will be distributed and used in accordance with the rules of this Fund, i.e., according to the country quotas at IMF, in the framework of reform programs approved by the IMF and in the form of balance of payments support. But should we not reverse the logic and determine channels according to the countries to which we should lend them and for what purpose?

1) To whom should SDRs be lent?

During the previous webinar on this topic organized by the Center for Global Development (CGD) and Foundation for studies and Research on International Development (Ferdi) last July, it became clear that, while several channels for redistributing SDRs are conceivable, an important issue in the debate is the determination of the beneficiaries and how they will be targeted. One conclusion of the webinar was that country vulnerability, in all its dimensions, should guide this redistribution. This raises several questions.

Is it possible that, in order to legitimize this choice, a simple and transparent allocation model that takes into account multiple vulnerabilities should be defined? Which vulnerability indicator (supposed to be universal and multidimensional) should be used? How should it be applied if several SDR redistribution channels are retained?

On the other hand, the criteria for geographic distribution of loans by both the IMF (quotas) and the World Bank (performance-based allocation), which are the two main channels envisaged, do not take into account the vulnerability of countries. Could their practice change for the distribution of reallocated SDRs?

Recycling SDRs based on country vulnerability is consistent with the purpose of the new SDR allocation, which is, by addressing the long-term need for reserves, to increase the resilience and stability of the global economy and to help the most vulnerable economies cope with the impact of COVID-19 (Statement by Kristalina Georgieva, IMF Managing Director of August 2, 2021 and G7 Communiqué of June 2021). However, if the reallocation of SDRs is conceived as an additional source of long-term development financing, an effectiveness test may be required.  Hence, the second question.

The first solution is to keep SDRs as reserve assets to deal with balance of payments crises. The reallocated SDRs would be used in the same way as the SDRs directly allocated. In this case, the interaction with other emergency facilities, notably the IMF, should be closely examined to avoid any arbitration that would lead to evading or delaying the conditionality attached to IMF financing.

Second, there is the question of the cost of using SDRs. To the extent that giving SDRs does not present, from the point of view of the donor country, a significant advantage over traditional budgetary credits, the recycled SDRs will be, for the recipient countries, borrowing resources, in foreign currency and with market interest rates. Even if the rates on SDRs are much lower than those that recipient countries could obtain, they remain significant if one adds the cost of financial engineering to preserve the status of SDRs as a reserve asset. Under these conditions, a first issue, particularly for LICs, is the trade-off with debt sustainability.

The standard solution to this trade-off is to finance future-oriented investments with a high long-term return. In this case, SDR financing would be an additional or alternative source of development financing. How to avoid substitution effects with traditional ODA and maximize leverage? The effectiveness of this allocation would also be increased if SDRs offset the pro-cyclicality of public investment, which is particularly strong in vulnerable countries. Another possible use of SDRs would be to finance preparation and adaptation to extreme risks, in terms of health or climate, with a very high return in the event that these risks materialize. Under these conditions, should an allocation to this type of expenditure be foreseen/imposed? 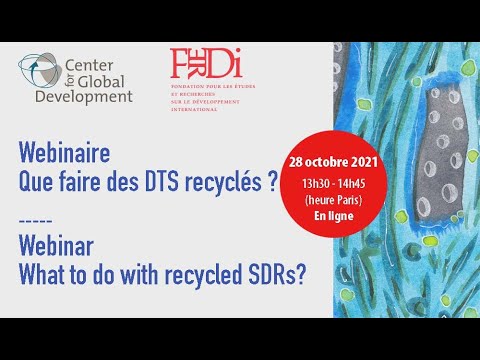